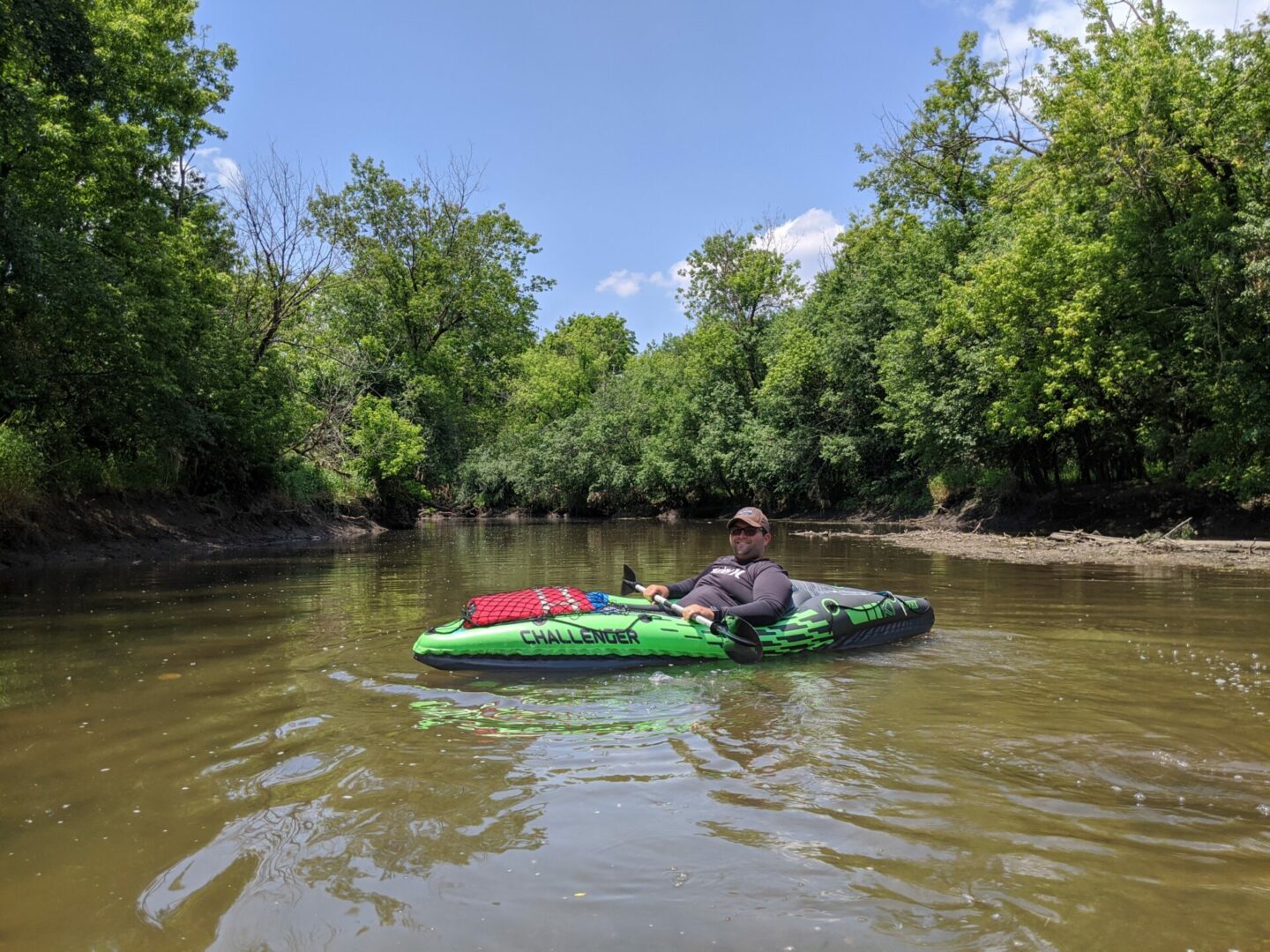 Kayaking, one of my favorite summertime pastimes. With Illinois being a fairly wet state, there is no shortage of lakes, rivers or ponds to plop in. But, this post isn’t about the activity of Kayaking. Its about the kayak itself, my inflatable kayak.

I bought the Intex Challenger K1. I got it originally for $70, but in a COVID market, they are much more than that right now. This kayak comes with a seat, telescopic oar, foot rest and high output pump. It all fits in a cloth bag, about the size of two king size pillow cases.

Inflating the kayak involves filling two main chambers. Filling those chambers takes about 15 minutes – 20 minutes. Having multiple chambers is kind of a must on the water, that way one hole doesn’t completely sink you. Deflating is just as easy, open up the two valves and just lay on the kayak. When you get most of the air out, roll it up and throw it in the bag. Done!

Take that Kayak on an Adventure!

I get that the whole “air is the only thing keeping you afloat” might seem scary, but I’ve taken this thing on some pretty wild adventures. One of them, if you’ve been reading 🙂 , was in Glacier National Park. This kayak literally saved my life. It was able to tackle those white cap waves on lake McDonald like a champ.

Its also good at handling calmer, lazier rivers too! I’ve taken this kayak on the Fox river, DuPage river and the DesPlains river. However, one thing to keep in mind with inflatable kayaks and lazy shallow rivers is the skeg.

The skeg will just drag at the bottom of the river, snagging rocks and any weeds. Usually, you can kind of tell how shallow the river gets up ahead by how “rippley” it is. Which at that point you are hopping and walking along side of your kayak in the river. Usually after doing that 3-4 times in a trip, I’ll just take the skeg off all together, which them makes the kayak severely fishtail.

As I’ve mentioned, you can use your kayak with one chamber, its just not easy. I’m pretty sure 90% of the holes in my kayak are from bottoming out in shallow spots on the river. In order to get the hole repaired, the first thing I need to do is find it. I fill my kayak to the max and then start dowsing it with soap water, looking for bubbles. Low and behold, underneath right at the nose, a pin sized hole spewing bubbles.

At first I tried using shoe goo, reapplying it over and over for multiple days. Turns out, the best option is to use an actual vinyl patch. My most recent kayaking has been leak free, for now…

Switching to a Hard Shell

Due to the whole deflating problem, while inflatable kayaks have many perks, I will eventually be switching to a hard shell kayak. Knowing that I could get a mount for my civic, that there is no skeg to worry about and that you move much faster in a hard shell, its time to give that a try. As far as drawbacks go, you can’t collapse a hard shell down, so storage will be an issue. While you don’t have to pump them up, they do weigh significantly more. And of course, with the COVID market, everyone is trying to find new ways to spend their time, so there are no kayaks in stock…

I guess Santa is going to have to bring me one this year 🙂 I’ve been keeping my eye on the Pelican Ultimate 100NXT waiting for stock to come in. We’ll see what happens.

Well that’s all I have for now. Next post should be printing related! Thanks for swinging by!