Archery: the good, bad, and ugly 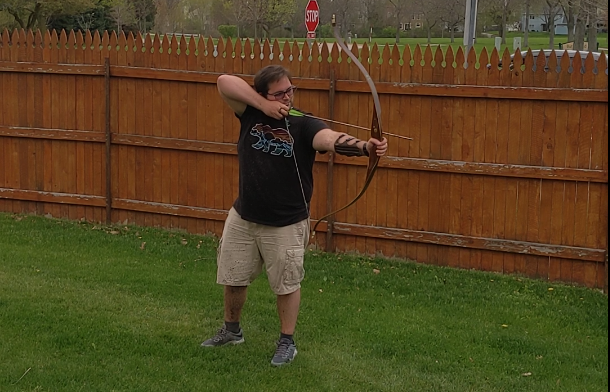 Archery, you know, that sport that involves a bow and arrow. Easier than a spear but harder than a gun. That primitive skill that our ancestors masters thousands of years ago that we lost today. I did some archery when I was a kid, at our local community center. I learned how to aim, proper stance, knocking and arrow and all that. I got pretty good at it too, but as they say all good things come to an end. The class closed up after a few years.

Later in High school, I met my girlfriend now my wife, her father owned some bows. He had a long bow, a re-curve and a compound. All on the older side, 1970’s and earlier. I borrowed his bows for a weekend or two, took them up to my parents lake house in Indiana to practice. I learned real quick that those arrows carry a lot of energy, and a miss on the target was a pretty bad thing. I wasn’t really thinking, was using brush and trees as my backstop but that is not a good option at all.

At that point, since I didn’t have a proper place to shoot without worrying about what I would hit if I missed, I hung up the bow for a while.

The cherry on top was all of the riots that started happening as well. A small reminder that things can turn for the worst and with Anarchy its every man for himself. Now, I’m a gun owner, so I wasn’t super concerned security wise. However, I was worried about the long game. The game of when you run out of bullets, now what do you do. Do you know how to make more? How are you going to hunt with no bullets? That is what really turned me onto archery.

Turns out with Archery you can reuse arrows!

Recently in April, I got a hold of my father in-law’s bows again and started practicing. My early setup was just the target in front of the back of the garage. Along the fence line, I was fairly concealed not to scare anyone and using the garage as my backstop, making sure no arrows go astray. As you can imagine, using the Garage as a backstop didn’t really pan out that well. I started off just re-learning how to shoot again. Getting comfortable with the bow and starting off very close. Over time, I worked my way back all the way to the opposite fence, roughly 25 yards!

I continued to get better, but of course I had my share of missed shots and lost a few arrows to my growing pains. Because the target sat on the ground, if I missed low to the left or right, the arrow would end up going right into the concrete slab for the basement. The arrow would just crumple like a beer can, with no good way to fix it. I took this as my sign to build a better backstop.

I found a few guys on YouTube that built backstops out of PVC pipe, rubber horse Stall mat as the wall, hanging layers of burlap fabric, etc. I ended up deciding to go with a rolling frame design. Essentially a framed box made of 2×4 pieces with a small platform attached to some casters. The idea being, when I’m ready to shoot, I can roll the backstop out and when I’m done, I just roll it back behind the shed. Easy!

The hard part about this whole project was getting a hold of some rubber mat. Again because of COVID, with everyone being stuck at home, lots of people started working out at home. Rubber horse stall mat is perfect for home gyms. My wife and I went to a dozen stores, farm and fleet markets, anywhere where we had a inkling they would have it in stock. All sold out…

We moved on to Plan B. From when we first moved in, we have some OSB boards left over, 8×10 Pieces. Drilling the board in place the backstop was complete. It works great for the most part! If there is any drawback at all, its that the holes the arrows make on the OSB, there is a small chance that an arrows will slip through a previous hole and still end up hitting the garage. One thing that I’m learning about myself is that when I make a mistake, my shots tend to land in the same spots 🙂

Un-learning how to do Archery

With my backstop all setup, I now just let the arrows fly. As I shoot I try to figure out the things that help my aim. Finding the right head placement, hand to chin, both eyes open, bow arm straight, etc.

Then I found Lars Anderson on YouTube. By far the greatest archer alive today. He essentially dug up all the ancient teaching of archery and showcases how modern archery is a much inferior method for using a bow. I would write a massive essay on all of his teachings but it’s way more fun to see of video of him just lighting up targets.

I will say that the few takeaways I started doing right off the bat is how to carry my arrows and how to knock them. I used to carry them via a hip quiver, now I carry them in my bow hand. When I knock, I do it from the left side of the bow, instead of swinging the arrow around and using both hands. Eventually I would like to get an ambidextrous bow so I can shoot from the right side instead of the left. That alone cuts down on draw time significantly.

Eventually I’ll be cool enough to move and shoot, hit multiple targets and take Lars head on, but I’ll save that for many years down the road.

Well, that’s all I got for now, thanks for swinging by! 🙂