Death Stranding: The End of Dying 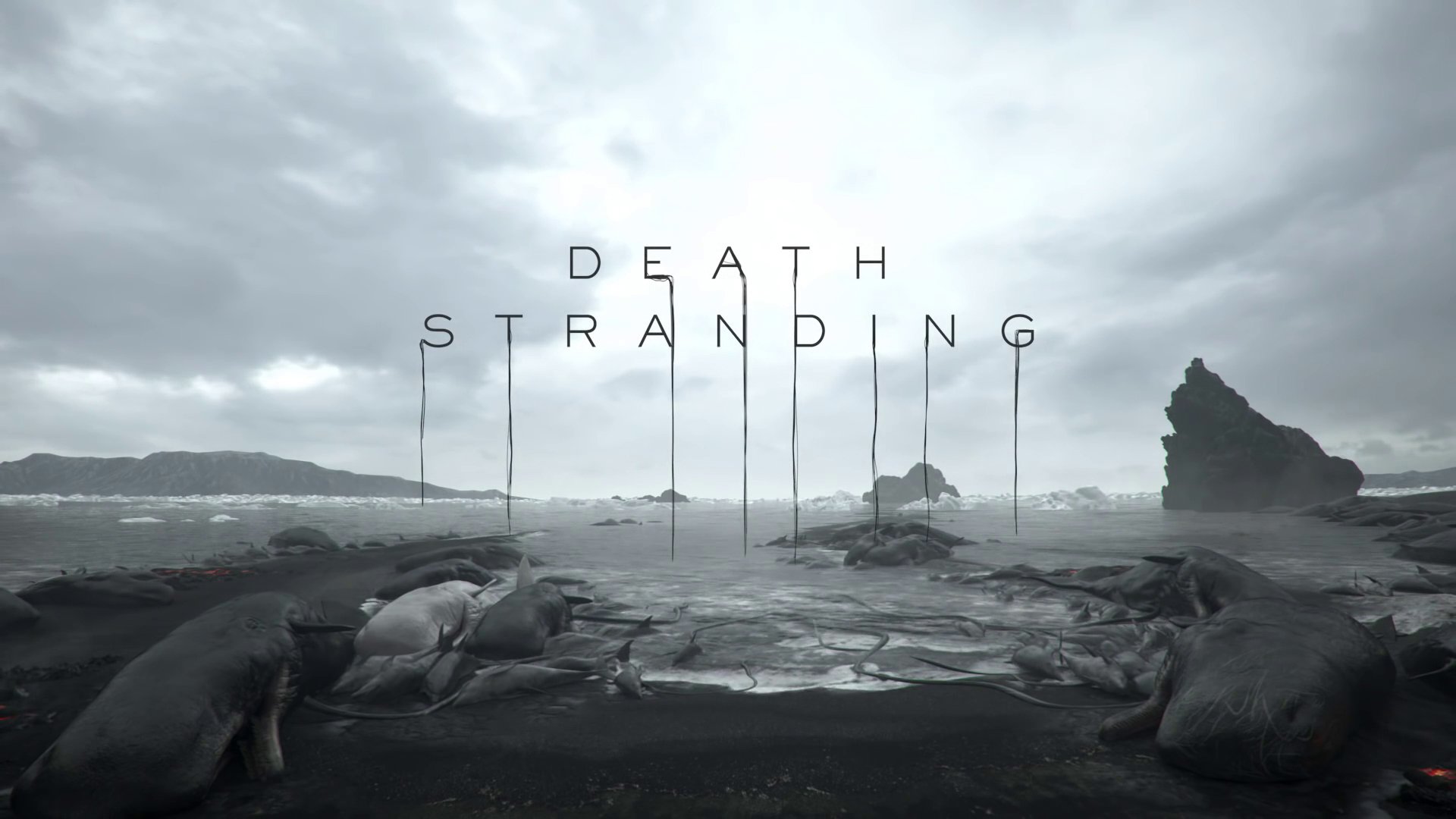 There have been several games that I’ve played through my life that have impacted me in a fundamental way. Games that have changed my behavior or the way I view the world. Games like Battlefield, Call of Duty, Splinter Cell, Ghost recon, Fallout 3, and Planet side 2 are just a few examples. It has been a very long time since a game has seriously impacted me like the ones listed. But on November 8, 2019, Death Stranding came to PC and was added to that list.

No, you don’t end up eating the baby in the actual game, but the ad does sum up the mystery of the game. Death Stranding is a confusing game, with lots of strange things thrown at you, and lots of insane abstract ideas and concepts. We’ve seen a little of this in the Metal Gear series, like with the FOXDIE virus, Metal Gear Gekkos, and Little Gray, the beer drinking mischievous monkey. Those ideas are nothing compared to what is told in Death Stranding. Lets start with the story.

The Story of Death Stranding

The USA fell during the Death Stranding, a catastrophic event that caused the deaths of millions and set some strange phenomena in action. Such as the weather. Whenever you see a inverted rainbow, you better start running. Inverted rainbows mean a timefall storm is coming.

Time fall is rain that accelerates the passage of time on anything it touches. If you stay in it for too long without proper protection, you shrivel up into an old person and die. If the storm is bad enough, it spawns invisible ghosts called BTs that wander the landscape attacking the living and summoning horrifying creatures. From the ashes of the old USA, rises the United Cities of America (UCA). Fragments of the old USA, holding onto the last remnants of society.

Enter, Sam Porter Bridges, played by Norman Reedus. Your job as Sam, is to deliver packages all over the UCA. By completing your deliveries, you help rebuild America and expend something called the Chiral Network. The Chiral Network is a massive telecom/3D printing network. Anyone on the network can use holograms to communicate, exchange physical resources across vast distances in real time, or build structures in the field via 3D printing. But Sam will need more than Chiral printers to survive the post UCA world.

What is with the Babies?!

Enter the BB, by far the strangest tool in the game. It is a baby that is kept in a canister, hooked up to Sam via an umbilical cord. The BB takes over Sam’s Odradek scanner, another tool Sam uses to scan for harsh terrain ahead, and uses it to let Sam know how close he is to a BT. So why a baby? It’s because unborn babies are the bridge between life and death. Dead enough to see BTs but alive enough not to become a BT. So with a little BB strapped in, Sam can fearlessly walk through a Timefall storm full of BTs without issue. Well, just as long as he doesn’t get caught! However, the BTs are not the only threat you have to worry about.

MULEs, tribal people that are obsessed with stealing packages that you are trying to deliver. They used to be legitimate couriers before the death stranding, but after many generations of being deprecated by automation, their minds have become twisted and sick of not being able to deliver packages. Now, they hunt down couriers and steal their goods, just for the thrill of being able to have packages to deliver with no destination. Sad, I know 🙁

Some of the missions Sam has to do is retrieve packages from MULEs, or make delivery’s that go through their territory. While BB can’t really protect you from MULEs, guns can! However, make sure you keep things less than lethal! If you kill a MULE, or anyone for that matter, a dead body left alone for too long can cause a void out. Aka, a really big explosion, just like the start of the first death stranding that caused many people to die. If you do accidentally kill someone, just make sure to get their body to an incinerator to cremate them.

No Dying in Death Stranding

Oh and don’t worry about dying yourself. Sam is what you would call a Repatriate, he can’t die. When Sam gets close to death, he slips into the other side, which is a sea full of strands of life. To come back to the living, you just need to find your strand and ride it back.

Well, that is the snapshot of the story of Death Stranding, lets now talk about the actual game mechanics!

The running joke with Death Stranding is that it’s a walking simulator, and in a way, it kind of is! How to carry your load, what equipment to bring on your journey all determine how easy it will be to get to your destination. Sam has a slew of equipment that help him deliver packages. Such as telescopic ladders, climbing ropes, exoskeletons, floating carriers, and much more. So before you load up Sam to the max, make sure you get an idea of the terrain you will be crossing, and have a plan for any obstacles you are going to encounter.

The most helpful tool in Sams arsenal is the Odradek Scanner. It not only allows you to see BTs, when used with BB, but it also gives you a quick snapshot of how rough the terrain is ahead of you. It can also tell you how rough or deep a water crossing will be. If you see blue dots everywhere, you can go full speed! Yellow means, you might want to slow down or get a better grip on your gear. If you see red, don’t even try…

Sometimes you gotta take it Easy

While Sam is a bad ass kind of guy who can comeback from the dead, he is still human. So it’s important that you don’t over work him. Make sure you keep his thirst quenched with some Monster Energy, and take rests once in a while. Find a hot spring and chill with BB, or just sit down and take a load off. Sam isn’t the only one who needs breaks too, while BB is technically a tool, it is still a baby. BB stresses out when encountering BTs, or if Sam takes a stumble and falls down. BB will start crying and you can either let it cry it out or sooth it by unhooking it from your suit and rocking it in its container. You can also lower it’s stress by resting at a shelter and hooking BB up to its still mother over the chiral network.

While there is lots of sadness and desperation in this game, its moments with BB and the gratitude of the people you are making deliveries to that make this game wholesome. Let’s talk about the feels that this game gives me 🙂

Death Stranding is one of the most beautiful games that I’ve played. I think to compare the sheer feel of scale and awe, a close cousin would be shadow of the colossus. The landscape of the UCA feels like Ireland, grassy, green, rainy and rocky. Making it very fun to traverse, balancing the challenge of the trek mixed with the beauty of the journey. Whether it be moving across snow capped mountains, across a series of rivers, a cracked earth badlands, or a lush forest, the game keeps your attention with the change in scenery.

In the first few hours of the game, one of your missions is to take a body up to an incinerator at the top of a nearby hill. The way the game kicks in music at the right time. The way it changes camera angle to make you feel the scale more. Even just the subtle change in Sams behavior and animation as he approaches the building. You can tell that there was a lot of time, effort and detail put into this game. This brings us to the last bit of this article, how this game makes you feel.

This is a very emotional filled game. I’m sure reading this you probably are still very confused. I want to emphasize that, it is kind of the point. This is a mysterious game, packed with phenomena and wonder. It encourages you to go that extra step and read notes left behind from others or do a little digging.

This game has affected me deeply. It makes me think about myself in a different light. That through the simple act of delivering packages and connecting everyone to the network. You are making the world a better place. It makes me think of my own life, the demons I face day to day. Thinking that I don’t make a difference. When all it takes is that one connection with someone else. Making that one delivery to make it all worth it.

The foundation of this game is loneliness. We can’t do it alone, we need each other. So next time to have the opportunity to reach out to someone, don’t think about it, do it. Because without connections to others, we might as well be whales stranding on the beach. We may as well be Death Stranding.