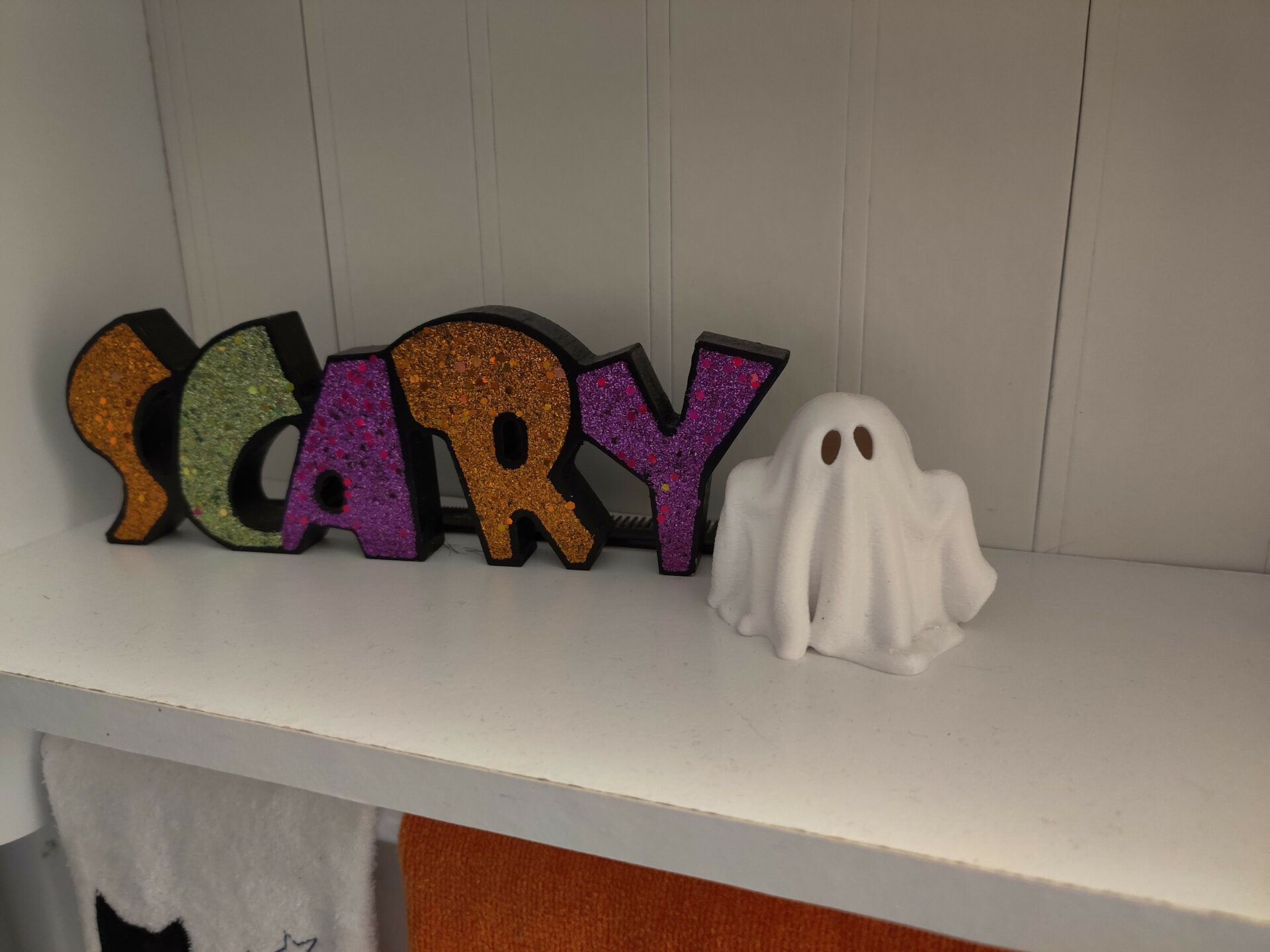 Yep! It’s that time of year again! Printing out a bunch of spooky prints just because we can! This year’s rendition went a little less handsy and a bit more Halloween-y. Before jumping in, I have a quick rant to get out.

Going through my current stock of filament, I had a ton of white PETG that I wanted to get through. Why? Because, PETG requires too much effort from me to get it to work right. Between tweaking temperatures, changing extruding speeds, adjusting retraction lengths, and other random mods, my prints were just not coming out right. They work perfectly fine using PLA, but I guess PETG is a different animal.

My brother-in-law explained to me (FYI he is a 3D printing wizard) that PETG is more susceptible to humidity, thus making it more gooey when it melts. That gooeyness causes stringing and layers to look warped and misshaped. I could get a dryer that hold the filament spool to keep things dry while printing, but that’s just another thing to buy. I’d rather just use PLA where it just, you know, works….

OK rant over! Let’s get into what we got for Spooktober 2021!

I Ain’t Afraid of No Ghost

Well, I actually am… I’ve only lasted a few minutes playing Phasmophobia VR. When it comes to the paranormal, I am a complete bitch 🙂 However, when it comes to printing out spooky icons, that I am ok with 🙂

Like I mentioned in the beginning, I wanted to get through the rest of that white PETG. So what better way to burn through a ton of it by making some Ghosts. I found these little guys on Thingiverse of course… The designer made lots of prefabbed models at different sizes. Lots of them for hollowed out for placing a small tea light inside them. Super easy print, no supports, no adhesion layer, no fuss!

Spooky Bones when the Wind Blows

Bones! Another great spooky candidate for getting rid of white PETG! This Thingiverse design was a little more complicated than the ghosts. The designer setup each finger as a separate STL files as well as the center holder piece. The fingers are all print in place, no need to pop joints together.

The problem I ran into with running sloppy settings with PETG, was with the supports. The supports from bed to print were no issue, it was the supports inside of the knuckles of the fingers. In trying to get some of them loosened, I may have broke a few fingers. But, this worked out in my favor, it gave the fingers a creepier look with a few pieces of them missing 🙂

My print approach was to print 5 fingers at a time, since the center holds 10 or 12. I used standard supports, nothing fancy.

The Spooky Tool to Scare the Crap out of Your Enemies

I actually caught wind of this (see what I did there!) thru my co-worker when he said that he ordered one. This gave me the idea to just print my own! Well, again I didn’t design it, I leave that for the smart contributors at Thingiverse!

Again bones are white so it worked out for getting rid of that damn PETG. However, because of the sloppiness of it, and this being a somewhat air tight reliant print, mine doesn’t exactly sound like that. Mine sounds more like what a dying cat… I’ll probably go back and print this one in black PLA+, I’ll most likely save that for next year’s post 🙂

Scared yet? If not, well that’s it…

Yep, that’s all I have for this one. Unfortunately I still have some PETG lying around. Well, I’ll be sure to find some use for it. Always cool things to find on Thingiverse! Be sure to visit the site and if you find something you really like, feel free to donate to the designer!

Next couple of posts will be more tech based. Going over why my printer was broken for so long and all the fun I had patching things back up again. Also bitcoin because why not!