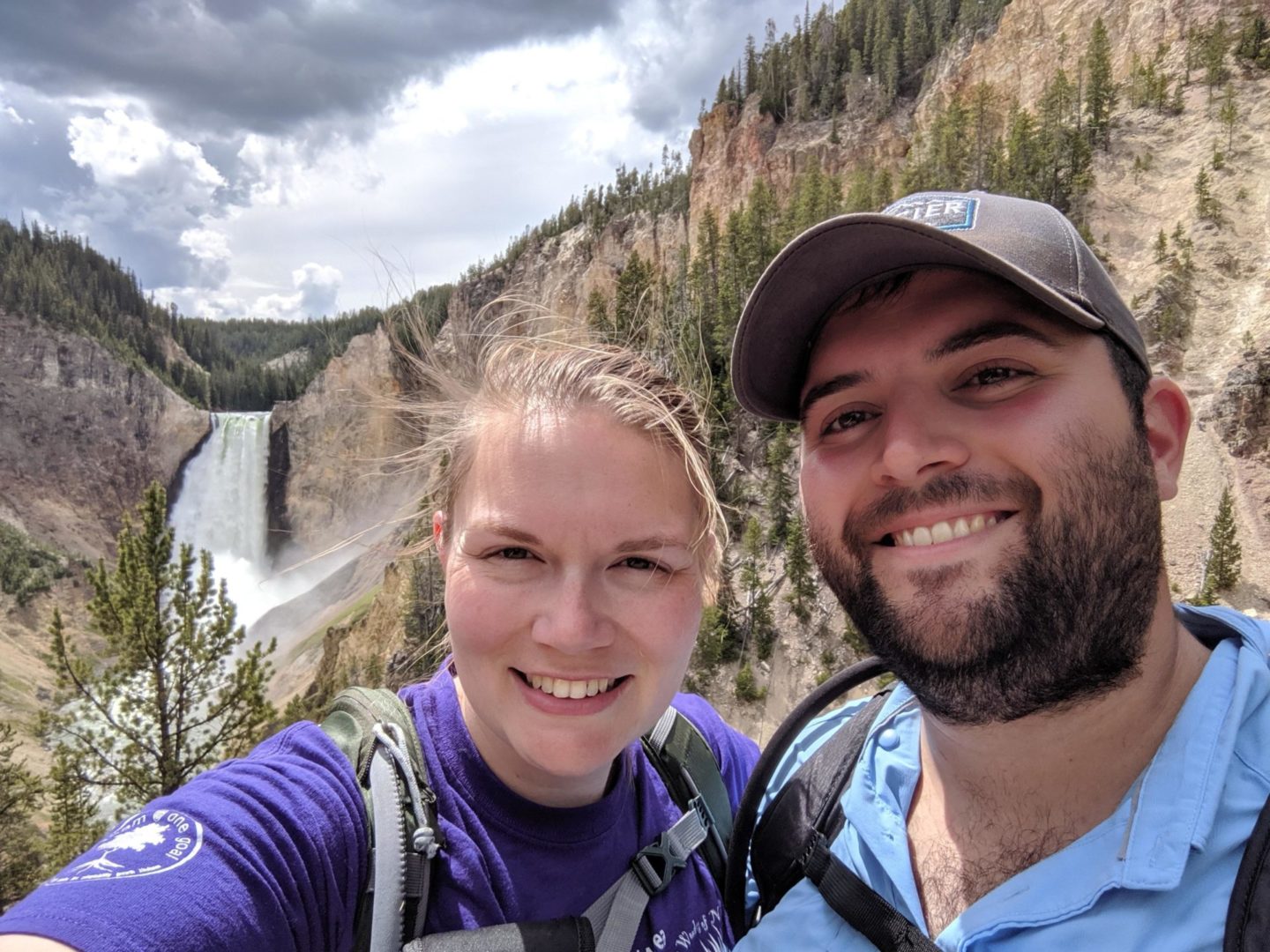 No! Get your head out of the gutter! Of course I’m talking about all the geological activity going on at Yellow Stone National Park! We left off saying good bye to Glacier National Park and start our 10 hour drive south from Montana to Wyoming. The scenery change is surreal when it comes to the US. Going from one set of mountains, to the big open hills in Montana (I really know why they call it the big sky state!) and into Wyoming where it turns back into shrubs and badlands. Sure enough, as we are driving along, we see it, Yellow Stone National Park.

We setup camp near the Mammoth hot springs, which I’ll talk about later. Since we just came from Glacier Nation Park and that we we’re still in Grizzly country, we we’re careful with food. However, many other campers around us didn’t practice putting food away, nor did the park rangers really enforce it. It was no where near as severe as it was in Glacier. While maybe they were not too worried about food attracting bears, it sure as hell attracted elk! They were all over the campground, visitors center, pretty much where ever all the people were. After setting up we ventured off to see the vast geological phenomena Yellow Stone had to offer.

Yellow stone was by far the busiest park we’ve been to by an order of magnitude. We set off for our first day late morning and the roads are already packed. Parking was horribly scarce, you were very lucky to spot someone pulling out right in front of you. Hiking was no better. Everything is made baby proof, with guard rails and signs everywhere on the trails telling you “Don’t do that!”. Even the hikers annoyed me. Most people were in regular cloths, flip-flops, had a telescope Nikon camera with them and were overall rude. While my wife and I are geared out with camel backs, binoculars and bear mace. A complete 180 to what we saw in Glacier.

I say that Yellow stone is the Disney land of national parks because it feels like it. You can tell its geared towards tourists (which yes I realize I am a tourist in this case). In Glacier, there was this sense of “You can hike but be careful”. Yellow stone is more like “Bah, go walk around don’t worry about it”. Everything was a wait, 100 people queued up to get the perfect selfie. And don’t get me started with the road blocks!!! Where everyone has to stop in the middle of the road to take a picture of a buffalo. I’ll clue you in on something, buffalo are not uncommon in Yellow stone!

OK, OK fine! Yellow Stone is not all bad! The geology is pretty great and the views are beyond scenic. Here is proof.

In spite of my peeves, the nature itself makes up for it. For the few sites were able to find parking at, we saw some incredible springs and rock formations. Fun fact, because the springs emit sulfur gas, the area smells like rotten eggs.

Also, I didn’t know the difference between roiling and boiling till I saw the springs. Boiling is when the heat source heats the water to a gas. Roiling is when the some external force disturbs the water. Hence why it looks like its boiling. Still probably not a good idea to go swimming in it.

Had enough with people for one day

On our way back to the campsite we ran into a buffalo friend on the trail. We also had a traffic stop on the road because of one. It’s not like waiting for some geese to cross the road. It’s surreal when you realize that they are as big as your car, if not bigger! I wasn’t kidding when I said that they were very common in Yellow Stone.

We decided to turn in early so we can get an earlier start tomorrow. Being that most of the campers were families, they are not early risers. So pro tip! If you decide to visit Yellow Stone, start early, go back to camp for lunch. Wait for all the families to go back for dinner, then set out again. It’s insane how the activity fluctuates. For day 2, we set our aim for Old Faithful and the microbial mats.

Not screwing around, we were up and on the road at 4 AM. The drive through Yellow Stone is about 50 miles, about the same as Glacier, so it’s an hour to get to Old Faithful. Thank God the traffic was light! When we arrived, the parking lot was empty and we had front row seats to watch her blow! Common misconception about Old Faithful is that it’s the biggest geyser. Not true, it’s the most reliable geyser, having very consistent eruptions every 90 minutes. Hence the name 🙂 While it’s not the biggest, it still erupts water upwards of 200 ft! Luckily we didn’t have to wait long to see the eruption.

We wanted to stay ahead of the crowds, so after the eruption we kept moving.

This was by far the most interesting part of the park. The Microbial mats are cultures of bacteria and other micro organisms that thrive in hostile environments. In yellow stone, they are Thermophiles, bacteria that love heat! Over the mats are built boardwalks, since the mats are highly sensitive and don’t do well with disturbances. Not to mention, since yellow stone is seismically active, you might step on a gas pocket and get fatally burned.

The mats change color as the water gets cooler. By cooler I mean 250 F to 190 F and so on. At the highest temp, the bacteria stays a yellow/mustard color. As it cools down, they change to be more orange and rust colored. I still don’t fully understand how the water stays that deep of a blue. I figured it was ammonia produced by the bacteria but it’s actually the water being that clean. Possibly from the temperature being so hot that nothing can foreign can survive?

Near the mats there were more hot springs, a mixed bag of smaller ones and bigger ones. Some of these were roiling and boiling, but mostly just stinky from the sulfur.

Having seen everything we wanted to see with the microbial beds we set off to go on a hike. It was approaching mid day and things were starting to get busy. We found a decent trail called Mystic Falls and Basin Overlook. It was a moderate hike, with a little bit of board walk and a lot of mountain side! There was nobody on this trail, at least past the board walk part. I guess this is what I was trying to get at earlier in my rant. I do remember at one point, I couldn’t tell if I was on the trail or following a deer trail.

With all the huffing and puffing switch backing up that mountain side, it was completely worth it. The overlook gave us the most amazing views, seeing the park and all the steam rising up. Made me think about what this would have been like thousands of years ago with mammoths and saber tooths talking around.

Wrapping up the hike we made our way back through the traffic to our campsite, to wait out the masses till dinner time. Around sundown, we set out to check out the mammoth hot springs by our camp ground. While I was half expecting there to be massive tar pits that mammoths would fall into, it turned out to be more interesting than that.

Much like the microbial mats, these springs are multi-colored based on temperature. However, the shape it takes is more interesting. Over thousands of years of water rushing over the same areas, leaving behind calcium deposits, miniature structures started to form. Similar to how stalagmites and stalactites form.

Originally, we were going to stay in Yellow Stone for 4 days, but we decided to cut it short. We didn’t feel like getting up super early every morning, rushing to see sites, go back to camp and wait till dinner. We packed everything up and set off. One last thing we did was take a photo in front of the Yellow Stone park sign, we forgot to do when we first arrived.

Across the street from the sign was small breakfast joint that had the best eggs and sausage. The building was also technically in Montana, which we joked on how much Montana is better than Wyoming in most aspects. (ITS A JOKE!!!)

After we finished breakfast we set off for South Dakota, destination Devils Tower and Mt. Rushmore!